Currently we have helped with the part financing of 8 individuals:

Muhammad Majid lives in an area called Kot Khawaja Saeed in the city of Lahore. He is 32 years old married, with four daughters.  Two of his daughters are getting education while the younger two are not of schooling age. He is the only earning hand in his house. Majid has worked as a shoemaker for long time. He makes shoes for different seasons. He gets his orders from shoes makers in Shah Aalam market in Lahore. He manages to earn 21,000 Rupees (about $200) in a month on average. Majid now wants to increase his earnings for his family’s sake. He has requested for a loan to buy bulk amounts of raw materials. He wants to buy leather and rexine, along with some other shoe making supplies like straps and buckles and adhesive solutions; he figures that he should increase his production to improve his sales and therefore his earnings. Johana Chuncho is 19 and lives with her partner and young child on the outskirts of the city of Loja. She grows and sells vegetables on a small plot of land. Doña Johana grows parsley, coriander, lettuce, alfalfa and others. These do not take long to grow. She sells her crops herself as an itinerant trader outside the wholesalers market. Usually she sells for between 25-50 cents per pound depending upon the item.  Doña Johana requested a loan to buy better quality seeds and organisc fertiliser. Mrs Balqees Bibi lives in Lahore, she is 49 years old, married and has one son and two daughters. Two of her children are studying while one has completed basic education. Her husband runs a food stall from where he earns 15,000 rupees (around $149) per month. About 10 years ago Balqees opened a small shop from her house, selling basic foods, soft drinks and sweets. She earns 5,000 rupees profit (approximately $49) a month. She does not have much stock in her shop. As a result, she would like to take out a loan so that she can buy one sack of sugar, one carton of cooking oil, different types of lentils, some bags of flour, washing soaps/powders. Balqees will buy all these items from wholesalers located in the main Bazaar. When she has more stock, she hopes that her shop will flourish and her income will increase. Mrs Amina Asghar is 54 years old, married and lives in Kahna Nou which is a locality in the city of Lahore. She has three sons and two daughters (aged between 10-20). Two of her children are going to school and the others have some basic education. Her husband and one son of age 20 work and earn 16,000 rupees per month. Amina runs a fancy embroidery business (locally called ‘silma sitara’) from her home. She earns 6,000 rupees per month. She does embroidery work on the clothes that a middle man brings to her, and pays for her work. She has been doing this for the past 8 years.  She reckons that they pay 3,500 rupees for utility bills, 17,000 rupees for other household expenses (food and clothing) and 2,000 rupees for the children’s education each month so making ends meet is a real struggle. Amina wants to buy embroidery materials in bigger quantities, which would be helpful in reducing her costs. She applied for a loan in order to buy cloth (chiffon) and pearls, stars and artificial diamonds. Kids in picture are studying and in their free time they help Amina with the embroidery work. Abla is 49 years old and a married mother to five children. She lives in the suburb of Edigbokele in Atakpamé with her husband and their children. Her youngest child is ten years old, whilst the eldest is 26. All her children have been educated or are in education. Abla herself is a retailer in the ingredients used to make bread. She travels regularly to Cotonou and to Lomé where she stocks up on a whole variety of ingredients used in breadmaking. Her products are very much appreciated by the bakers in the outer suburbs who must travel every day to source the stock ingredients that are indispensable to making high quality bread. Abla started engaging with the microfinance organisation WAGES two years ago and has already benefitted from two loans for 300,000 and 400,000 West African francs respectively – she paid them both back appropriately. It is with the aim of expanding her stock and thus improving her sales, which is now much more significant than before, that she is requesting this new loan for 600,000 West African francs, repayable in twelve instalments. Abla has run her business for close to five years now. In order to launch it, she resold the bread that she had purchased from other bakers. She hopes to be able to make enough money to ensure the sustainability of her business and to furnish her home.

Roeurt Kon is 49 years old and married with three children. The eldest is 21 and the youngest is 16. The elder two are already married and live separately, while the youngest is attending a local secondary school. They live in Kropue Chueng village in Banon district which is in Battambang province. Roeurt has recently become a member of Takream Credit Union. Roeurt and her husband, Thoung Ming who is 48, have worked as farmers for over 20 years. They own three hectares of rice paddy located near their home. Aside from farming, they also raise and sell pigs. They started rearing ten piglets recently as the market demand for pork is quite high. According to Thoung’s calculations, they will rear the pigs for around four months before selling them. Buyers come to their home and negotiate a price. Roeurt has sought a loan in order to buy more piglets and animal feed.  Roeurt and her husband plan to rear ten more piglets next year.

Alberta Gorres is 54 years old and married. She has four dependents: an 18 year old son who is in full time education as well as three grandchildren aged 2 and 3 as well as one who us just 4 months old. With the support of her husband, Alberta established her own business in their hometown of Pinamungajan in the province of Cebu. She has for the last 35 years managed a business supplying timber. It is accredited with the local authorities as a legal business since the timber she supplies is from sustainable and trusted sources. It includes bamboo and other wood that grows abundantly in the province. Alberta employs three full time members of staff in the business; one is a driver, a second is an operator, while the third is responsible for the maintenance and cleanliness of the premises. She applied for a loan from the microfinance organisation, Lamac Multi-Purpose Co-operative in order to buy more stocks of timber. She sells a lot to people wanting to build foundations for their homes. Alberta wants to buy a new truck eventually instead of renting large vehicles whenever she has orders.

Abbas Ali is 27 and married with one son and two daughters. One of his daughters is getting education while the other two children are still too young. He lives in his own house, in an area called Kahna Nou, in the large city of Lahore. Abbas is a traditional men’s barber, offering haircuts and shaves from his shop in the local market. He has had the business for the last five years and pays 2,500 Rupees per month for his shop’s rent. He estimates that he earns about 15,000 Rupees per month. His monthly expenses include bills (about 2,500 rupees), food and clothing (11,000 rupees), and school fees (1,500 rupees). He requested a loan in order to buy a new trimmer, 12 shaving creams, a new chair, face creams, beauty masks, anti-germ liquids and razors. He will be able to sell the beauty products to customers as well as undertake his job more efficiently. 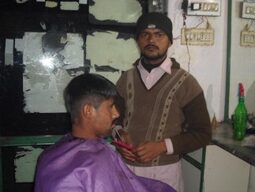